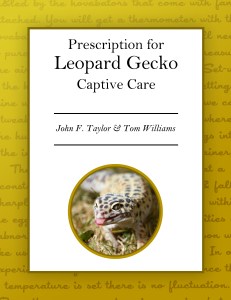 many classrooms and children’s bedrooms, without the fear normally associated with the now infamous salmonella scare of turtles or snake bites so easily broadcast by the mass media furthering the gap between herpetoculture and the public at large. I will save that diatribe for another piece.

To my knowledge all of the Leopard Geckos (Eublepharisnmacularius) offered for sale today are what are known as captive bred. This is a benefit to all keepers as this means that there is no concern about any bacteria or other such infestations usually associated with captive born or wild caught animals. Not to mention the fact that wild populations are no longer impacted by collection practices.

Captive care of Leopard Geckos (Eublepharis macularius) can be considered one of the “easier” reptile species to care for, when comparing care requirements of other species offered for sale. I’m hesitant to use the word ‘easier’ as it can and often does lead to a false sense of being able to purchase a Leopard Gecko (Eublepharis macularius), place it in an enclosure and just live as they normally would while feeding it once a week. I have said this before and I will reiterate the same here.  Reptiles are not and should never be considered a disposable pet. No pet for that matter should ever be considered disposable.

That being said I’m going to get into their captive care requirements now. The very first thing you should do as a potential owner is what you are already doing here.  Read not just this article/post but as much information as you can possibly get your hands on. While I am an authority on reptiles I do encourage you to seek out other sources of information. There is no such thing in my opinion as too much information when it comes to the captive care of reptiles.

Once your research is done I would go and buy all of the equipment and appliances needed to set-up your new pets home and have it running for a few days prior to bringing your new pet home.

The biggest consideration you have to make with all Leopard Geckos (Eublepharis macularius) besides the color/morph you want is the enclosure. There are reptile and fish tanks and each can provide a place to keep your new pet. Reptile enclosures typically come with some type of lid or sliding screen; fish tanks are generally open. The reptile enclosures are generally more expensive which is why I go with a fish tank and add my own screen top of appropriate size and add clips to hold it into place to keep out the cats that I own.  If you own no other pets or have children old enough you don't even have to put a lid on it as long as you don’t give the Leopard Gecko (Eublepharis macularius) a climbing branch or décor that they could use to escape. 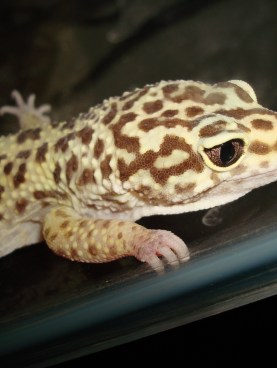 You will also need a heating element of some type which will serve for a basking spot.  This should raise the ambient temperature to about 85˚ and the basking spot to 90˚.  I like ceramic heaters and use the domes which come with a ceramic housing as well. It is likely that if you use plastic that the plastic will melt due to the output of heat. You will also need a hide that the Leopard Gecko (Eublepharis macularius) will be able to go into and feel safe and secure when not roaming the enclosure. I usually go with the rock type which is actually molded plastic.  This is placed about halfway under the heating element but you can also purchase two hides and place them at alternate ends of the enclosure allowing the Leopard Gecko (Eublepharis macularius) to choose when thermoregulating itself.

All of the items mentioned above can be purchased in a local pet store that sells reptiles. The next important piece is that of substrate or the material which will cover the bottom of the enclosure. There are a multitude of reasons why people select the substrates that they do. While they all may have their valid reasons I tend not to agree with most of them and this is due to my personal experience when it comes to raising and breeding Leopard Geckos (Eublepharis macularius). I have learned

throughout the years that washed play sand available at major home improvement stores works just fine for juvenile and adult Leopard Geckos (Eublepharis macularius). I use the same substrate with my entire collection of desert dwelling reptile species without any issues.

A water bowl of sufficient size for the Leopard Gecko (Eublepharis macularius) to crawl into and soak is also needed. Décor can be live plants or plastic. I go with the plastic and a piece of sandblasted grapevine to assist in shedding. An interesting note regarding shedding Leopard Geckos Eublepharis macularius is this. During the shedding process known as ecdysis they will ingest or eat their shed skin. The reason they do this is presumed to be that the recapturing of lost nutrients.

When it comes to feeding Leopard Geckos Eublepharis macularius will eagerly consume most types of insect fare that are offered. The typical foods include crickets and mealworms of appropriate size as well as wax worms which can be fed as an occasional treat. All of these are found at the local pet shops which sell reptiles.  I will feed no more than the Leopard Gecko (Eublepharis macularius) can consume within a one hour time frame. Every other feeding the crickets are dusted with a vitamin and calcium supplement.

When it comes to maintaining a healthy Leopard Gecko Eublepharis macularius it is a matter of simply changing the water daily and sifting out the feces or waste from the enclosure. Once a month the entire enclosure is dumped and the décor and enclosure is washed with warm water and the sand is replaced. 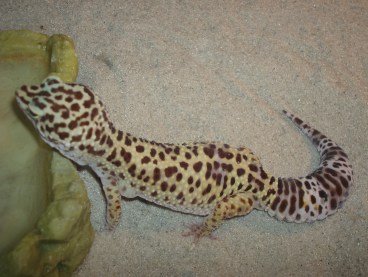 Leopard Geckos (Eublepharis macularius) make an outstanding introductory pet to the wonderful world of herpetoculture.  They are easily handled and reasonably priced.  I would encourage anyone thinking about owning a reptile as a pet to look into these incredible Geckos as a first pet when it comes to reptiles.

Special thank you to John F. Taylor for allowing us to post this great caresheet. Please visit his website at www.reptileapartment.com